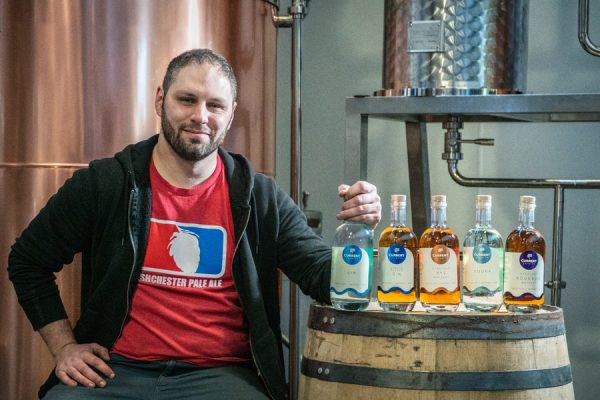 What Got You Into Distilling/Spirit Making?

I got into making alcoholic beverages about 12 years ago; like most people that do that, with beer making. I also really like engineering so building a still and trying out distilling seemed like the next step (despite this being “illegal”). So eventually I was asked by a friend to help her make wine in VA when she made the career move from photography, mainly because she knew I had made some beer and spirits and needed some help for a harvest season. After that in 2013 I came back to NY and sent a resume to Tuthilltown who hired me to work in production.

What is Your Background in the Spirits World?

So starting out in Virginia wine, and being a fan of consuming whiskey is where I figured I’d try for distilling as a career. I ended up working at Tuthilltown starting in basic production, and within a couple months was promoted to full distiller to run the stills on one of the daily shifts. I ended up going to Hillrock after that for a very short time; that was ended when I fell down a flight of stairs and broke my ankle.

At the end of rehabbing my ankle, I met Denning’s Point. I was looking for a new position, liked the idea of working in Beacon at a distillery, and ended up helping them get the distillery from just owner operated to taking me on as full time chief distiller instead of consultant. I worked there from late 2014 until I started here at Current Spirits.

How Did You Meet Captain Lawrence/Scott?

I met Scott through our shared relationship with Tyler (Still the One). Tyler and I worked and ran production at Tuthilltown together, and Tyler eventually came to work at CLBC. When Scott asked Tyler if he was interested in the position he passed my resume along.

What Are You Most Excited About Making?

Almost everything really. I enjoy the challenge of engineering something new, or perfecting something already established. We really have the ability to do whatever we want here, so it’s just a long list of projects that I’m looking forward to. At the moment I’m looking forward to making some great single malt whiskey, some flavored whiskey, and some unique armaros. My pride is in making gin though, in my opinion gin is one of the toughest spirits to make.